Welcome!
Close
Would you like to make this site your homepage? It's fast and easy...
Yes, Please make this my home page!
No Thanks
Don't show this to me again.
Close

I'm Brett, and I'm a Michael Jackson Impersonator. I can preform dance moves that are assoicated with Michael Jackson, including the moonwalk. I also lip sync to his songs.

I love doing what I do. Nothing in the world can compare to going up in front of people that you don't even know, and have them clap, and enjoy your performance.

I hope that you enjoy this site!

I AM SELLING ONE OF MY MICHAEL JACKSON STYLE JACKETS FOR $80.00.  IF YOU ARE INTERESTED IN BUYING IT SEE PHOTO TO THE RIGHT.

Highlights as a Michael Jackson Imposter

I have only been doing my Michael Jackson Dances in public for 2 year now, but I have been working on my "King of Pop" skills for almost three years. Now I'm at the point of perfection with my dance moves, lip sync, and speaking like Michael Jackson. Here are some of the highlights of my career in public so far.

Performing at the 2002 High Carnival

Performing at the 2002 Spring Formal


Performing Billie Jean at a fair in Ohio

Doing some dancing in the halls for around 50 people

Performing at a wedding in Maryland

I AM SELLING ONE OF MY BELOVED MICHAEL JACKSON  REPLICA JACKETS FOR ONLY $80.00.  THIS IS A GREAT OPPORTUNITY FOR YOU TO GET YOUR HANDS ON ONE.  THIS IS A THRILLER STYLE JACKET WITH REVERSE COLORS.  THIS JACKET IS WORTH WELL OVER THE PRICE I AM SELLING IT FOR, BUT I NEED TO MAKE ROOM FOR A NEW WARDROBE.  I PERSONALLY WORE THIS JACKET TO PERFORM IN. IT IS MADE OUT OF POLYURATHANE, WHICH IS A VINYL/LEATHER LIKE MATERIAL. .  IF YOU WOULD LIKE TO BUY THIS JAKET, OR HAVE ANY QUESTIONS ABOUT IT.  IT IS FIRST COME FIRST SERVE, SO E-MAIL ME QUICKLY, YOU MUST SAY "I WANT THE JACKET" FOR ME TO CONSIDER IT SOLD.  IT IS ONLY $80.00 +  THE ACTUAL SHIPPING AND HANDLING (CALCULATED AFTER THE JACKET IS PURCHASED).  I CAN ONLY SHIP TO THE U.S.

IF YOU ARE INTERESTED IN BUY THIS JACKET, OR HAVE ANY QUESTIONS ABOUT IT. THE JACKET IS ONLY $80.00 USD.

E-mail me your comments.

Contact me at-- mjentertainer@hotmail.com I want to hear what you think. give me some ideas, tell me what I need to work on. I want your opinions. Tell me what you think about my performances.

Join in our - Dance and Dance Studio Chennai 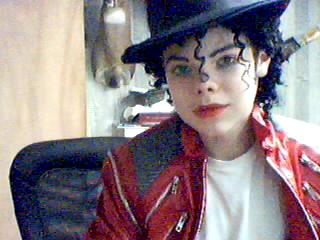